The UNESCO-designated Fundy Biosphere Reserve is pleased to announce the appointment of two new members to its Board of Directors, Guy Gautreau and Denise Roy. The new directors were elected at the FBR Annual General Meeting, held at the Molly Kool Centre on May 10, 2014 in Alma, New Brunswick.    Guy Gautreau hails from the Village of Memramcook, and his past experience as the municipality’s community coordinator, as well as his keen interest in hiking and local food issues, will add greatly to the capacity of the Board. Denise Roy joins the Board from the Greater Moncton region, and as a nature conservation enthusiast, her knowledge and enthusiasm will certainly benefit the Board in many ways. 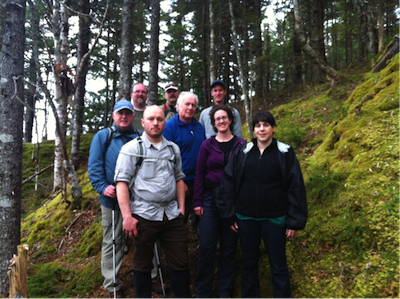 Some members of the Fundy Biosphere Reserve Board of Directors and staff out for  a hike in Fundy National Park, prior to the AGM.

“We are very pleased to welcome our two new Board Members,” says FBR Chair Dr. Yves Gagnon. “I’m very proud of the work accomplished this past year by our Board and staff. The UNESCO-designated Fundy Biosphere Reserve’s profile continues to grow and it maintains a strong leadership presence nationally and internationally throughout the network of Biosphere Reserves.”

“This past year was one of continuing successes and enormous public interest in the UNESCO-designated Fundy Biosphere Reserve,” adds FBR Executive Director Megan de Graaf. 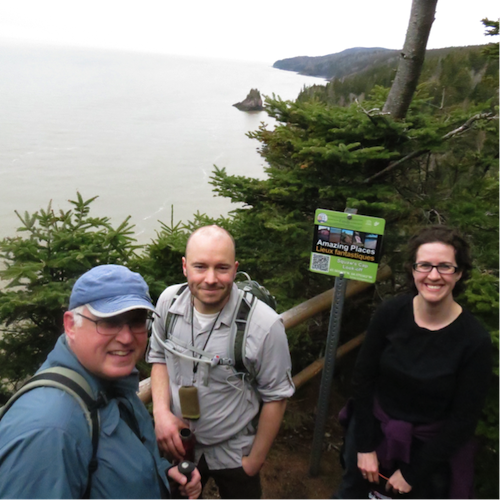 Indeed, the FBR’s documentary film, The Whitney Journals, was on display at the Royal Ontario Museum and secured peer validation through the Phoenix Award by the New Brunswick Environmental Network. The film, along with a series of short documentary videos about climate change in Atlantic Canada produced with Dr. Ian Mauro, will be used in middle and high school classrooms to give students an opportunity to learn about climate change from locals with decades of first-hand experience (www.climatechangeatlantic.com).

Short Planet Earth-style videos documenting some of the FBR’s unique Amazing Places were featured in Canadian Geographic Travel and three of the videos were screened at the Silver Wave Film Festival. The videos have been launched publicly this spring, with a new video being released each week through May and June 2014 (FBRAmazingPlaces.ca). The Amazing Places project focuses on nature conservation education, promoting active outdoor exploration, and a sustainable visitor and resident experience. The FBR believes that by fostering pride of place through these videos, residents of and visitors to the Fundy Biosphere Reserve will become champions of this region.

All projects undertaken in 2013-14 are featured in the FBR’s Annual Report available here.

The AGM was part of a joint Open House event with the Molly Kool Centre. The organizations forged ties over a hike in Fundy National Park and potluck lunch. Member of the surrounding communities along the Upper Bay of Fundy were invited to come visit the newly renovated Molly Kool Centre as well as learn more about projects being lead by both organizations. 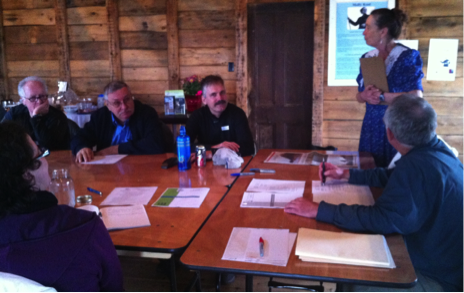 AGM participants were treated to an impromptu Kitchen Party. Actors dressed in period costumes brought the history of Captain Molly Kool and the village of Alma back to life with stories, song and dance, to give a taste of this new theatrical performance, which will take place at the Molly Kool Centre throughout the summer.