MONCTON, NEW BRUNSWICK – A national spotlight is set to shine on the UNESCO-designated Fundy Biosphere Reserve (FBR), thanks to TVO’s upcoming Striking Balance documentary series. The Striking Balance series premiered on TVO on October 4 and is narrated by Blue Rodeo’s Jim Cuddy.

Produced in association with The Nature Conservancy of Canada, the Knowledge Network, Parks Canada, and the Canadian Commission for UNESCO, the Striking Balance series is set to air through this fall. It explores eight of Canada’s breathtaking UNESCO World Biosphere Reserves, sharing stories of little-known, but amazing scientific and cultural discoveries happening across this vast and resource-rich country.

Striking Balance, the Fundy Biosphere Reserve, and Parks Canada are hosting a public screening of the Fundy episode on Friday, October 14 and Saturday, October 15 at the Salt and Fir Centre in Fundy National Park at 7pm. The events are free to the public and all are welcome to come and watch this exciting 50-minute exploration of Fundy’s salmon, people, tides, shorebirds, and forests. 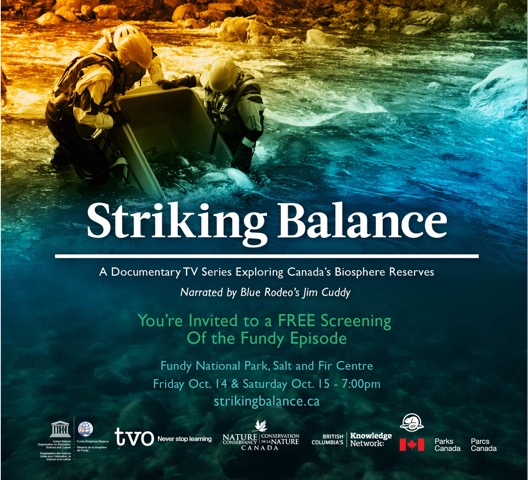 “We are excited to welcome back the Striking Balance team for this public screening of the episode,” says Megan de Graaf, Executive Director of the Fundy Biosphere Reserve. “It was such a great experience to be part of this nation-wide project, and such a great opportunity to share Fundy’s story with people all across Canada.”

“The Biosphere Reserve concept was a kind of revelation for me,” says Zach Melnick, Director of Striking Balance. “The idea that people were not outside of nature, but a part of it, ultimately became the focus of the Striking Balance series. We’ve been touring to each Biosphere Reserve from the series, co-hosting public screenings of the episodes to launch the project and invite local communities out to see the episodes on the big screen. We’re really looking forward to showing folks from the Fundy region the stories we captured.”

“The Striking Balance team did a fantastic job of collecting some of the most important stories of our region, especially those that relate to the challenges we face, and the solutions we are collectively developing to those challenges,” says de Graaf. “We face unprecedented problems with how climate change is affecting our forests, how the Inner Bay of Fundy Atlantic salmon are navigating changes to their habitat, how white-nose syndrome is decimating our bat populations – and there is some truly inspiring work going on in the region to see us through these problems.”

The Striking Balance team held a first visit in the Fundy Biosphere Reserve in October 2014 and again in July 2015, interviewing staff and board members as well as various partners, such as the New Brunswick Museum, Parks Canada, the Hopewell Rocks Provincial Park, the Nature Conservancy of Canada, Fort Folly First Nationand Mount Allison University.