(News release written and shared by the New Brunswick Museum) 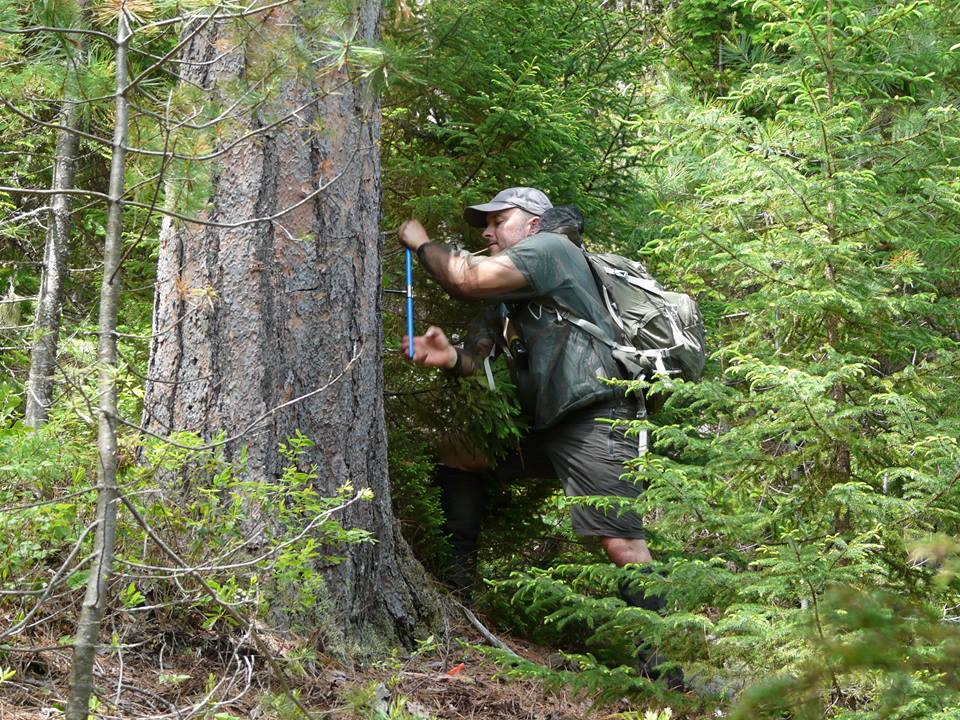 It has just been confirmed that two red pine trees found in New Brunswick are approximately 300 years old, making them the oldest known individuals of the species in Atlantic Canada. They were discovered two weeks ago during the New Brunswick Museum’s “Biota NB” event held in the Nepisiguit Protected Natural Area (PNA).

The trees were identified by Mount Allison instructor and dendrochronologist Ben Phillips who was participating in the event. Phillips is also the Conservation Scientist for the Fundy Biosphere Reserve.   “I was actually looking for old white pine with some other Biota NB folks when I spotted a large, knarly red pine and it didn’t take me long to get over to take a closer look,” explains Phillips. “The bark was unlike any I’d seen before on red pine, so I knew this was a special tree, but I was expecting it to be hollow like many very old trees.”

Protected Natural Areas such as Nepisiguit preserve some of the province's remaining old growth forests. Discoveries such as the 300 year-old red pines are significant because red pines usually only reach a maximum age of 150 to 200 years old and most die much earlier. Spared from the chainsaw, these great-grandmother pines have re-seeded downslope, creating an entire stand of old growth red pine.

Phillips was able to determine the age of the tree through tree ring count and an understanding of red pine growth in a forest setting. Using an increment borer, Phillips extracted a pencil sized core extending from the center of the tree to the bark.   “Turned out it was solid all the way through and the rings were extremely tiny and tight together,” he reveals. “It was obvious right away that this tree was many hundreds of years old, then I looked up and saw a nearly identical red pine only meters away.”

Phillips began studying dendrochronology, the science of tree-rings, as a student at Mount Allison over a decade ago, and has never come across centuries old twin trees of any species.   “New Brunswick’s Protected Natural Areas conserve much of the province’s little remaining old growth forest”, states Phillips. “Without this protection and the NB Museum’s event, I wouldn’t have had a reason to go exploring for these trees. Now that we know they are there, it brings some pride and a little bit of a sense of awe back when thinking about today’s diminished NB forests. Hopefully this will inspire us to do more to save the old forests we have left because a little-known world of creatures depend on those old trees.”

Dr. Donald McAlpine, the organizer for NB Museum’s Biota NB and provincial zoologist with the New Brunswick Museum explains, “Each year we bring biodiversity scientists together from across North America and take them out to discover and catalogue the diversity of organisms in the province. This year we were working in the Nepisiguit PNA, next to Mount Carleton Provincial Park, when Ben found these two extraordinary red pines. These weren’t the only discoveries during this event, as species from mushrooms to earthworms were recorded in NB for the first time.”

In 2005 Phillips found the world’s oldest living Red Spruce tree in Fundy National Park which is still alive and now over 465 years old.