Millions of people from all over the world have come to explore the sea stacks at Hopewell Cape.  In the Bay of Fundy, the highest tides on Earth create exceptional landscapes, and tidal erosion makes this Amazing Place one of the most unique in the UNESCO-designated Fundy Biosphere Reserve.  The formations at the top of the beach draw much focus, while little attention is paid to the strange creatures that live along the low tide limits.

Recently, Kevin Snair, the supervisor of interpretive services at the Hopewell Rocks and professional photographer, decided to start surveying the most extreme limits of the intertidal zone.  Kevin explains, “Working at the Hopewell Rocks has given me a big responsibility as a knowledge keeper.  When visitors arrive my job is to answer their questions, and that drives me to keep learning more about this place."

What Kevin found next to the chocolate coloured, sediment-loaded water, were very alien-like life forms that were not expected this far up the Bay of Fundy.  For years Kevin has been collecting historic photographs of the sea stacks to compare with his own to track erosion.  "If I had a time machine, I'd go back here," he says, "Five hundred years ago it would still be recognisable, but 1000 or 1500 years ago, it would be a different Hopewell Rocks."  He recognises how much this place changes over time and he is well aware that the rocky bumps further down the beach are actually old stumps from sea stacks long ago destroyed by the tide.  It is those very same “stumps” that provide habitat for all the sea life.

One of the primary reasons the organisms he discovered were able to remain largely undetected for so long is the habitat they prefer at the lowest intertidal zone.  Only during spring tides, when the moon and the sun are aligned, do their gravitational forces combine to create the largest tidal range.  This is when the tide recedes far enough to expose these mysterious creatures, but even then, they are only uncovered for 15 to 20 minutes.  For Kevin to explore the lowest intertidal zone at Hopewell, he had to know the tidal cycles very well.  "The clock on my wall at home is actually a tide clock," he remarks.  "Most people don't understand that the moon's gravity is the primary driver of the tides, so the trick is to get to know the patterns of the moon and then you automatically know when the tide will reach its spring range of 14 meters (46 feet)," Kevin explains.

A typical seaweed community covers the old sea stack stumps along most of the beach.  Winkles, whelks, and limpets are some of the creatures Kevin often finds within the knotted wrack and bladder wrack.  It is below this zone where stuff gets really weird.  “Earlier this season I took a group down to do the first ever survey, and that's when we found three species of sea anemones,” reveals Kevin.  “We found red anemones, silver spotted anemones and painted anemones,” he says with a grin.  These species are found elsewhere in the bay, so they aren’t unique, but finding these little gems in the muddy upper bay is a surprise.

Sea anemones are relatives of corals and jellyfish, which fasten themselves to rocks using an adhesive foot.  They have venomous tentacles that can fold inside during low tide and in an extraordinary twist, they don’t seem to age.  As long as they are not eaten, poisoned or starved, they could be immortal.  Exposed only on a few of the very lowest tides each month, they usually stay safe and hidden from sight; except for one thing.   When Kevin took us out, we photographed an interestingly patterned piece of sediment on an anemone.  "Once we looked closer, we realised it had legs, eight of them!" exclaims Kevin.  It turned out to be an anemone sea spider feeding on the anemone.  "When we started reviewing other photos on a large computer screen, we found more and more sea spiders camouflaged in the mud around the anemones; they’ve probably been here all along,” says Kevin. 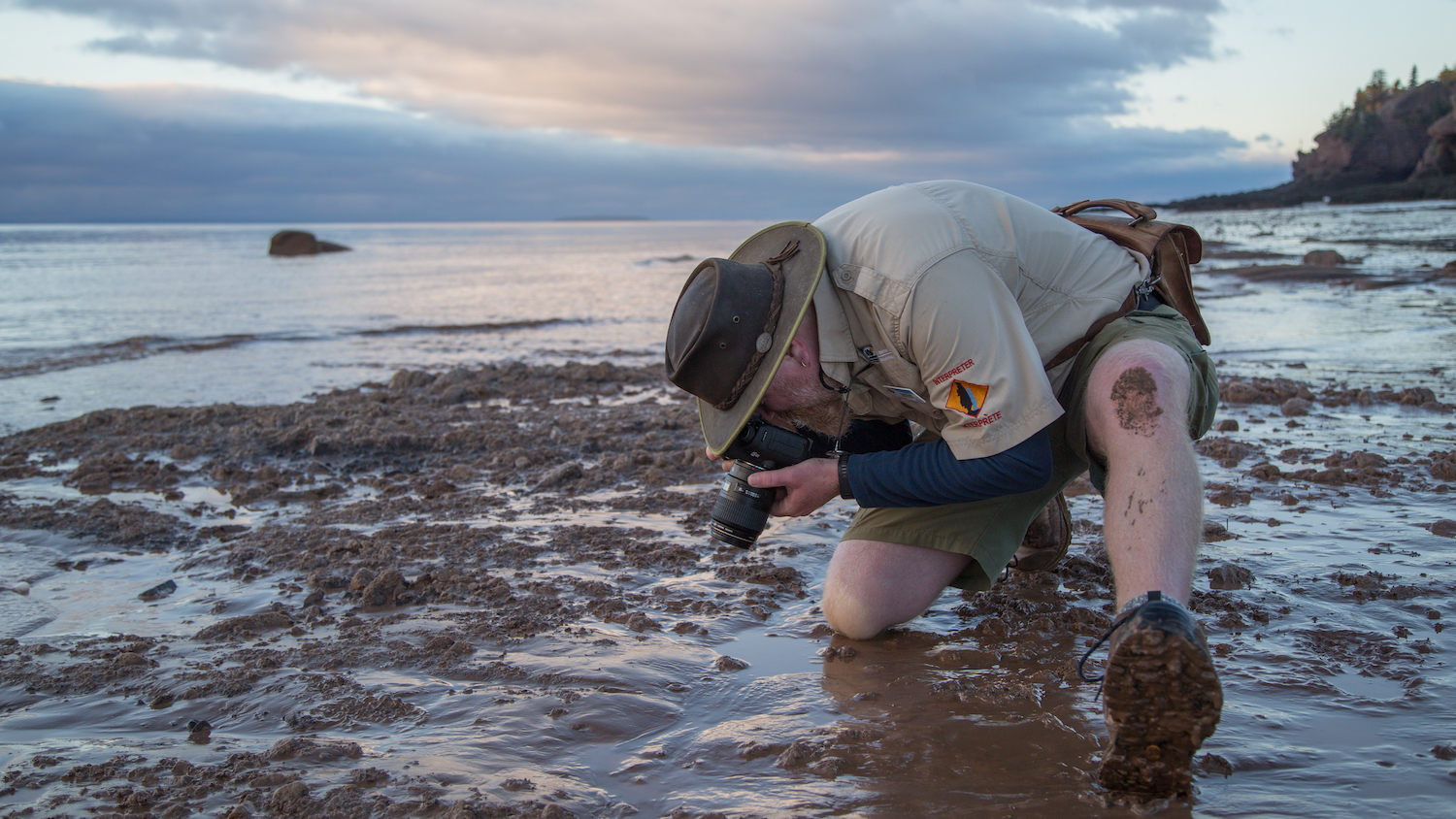 Given the chocolate coloured water, it is tough to tell how much further the rock platform extends.  “It might go on for a few meters or a couple hundred before it is buried in mud, but one thing is for sure, there are probably a lot more of these guys beyond the low tide mark,” states Kevin.  Often sea anemones take algae into their bodies to gain energy from photosynthesis in exchange for protecting the algae.  “It is hard to imagine that much light could reach them in this water”, Kevin suggests.  “We do know that a lot of fish like flounders, cod, gasperaux, sturgeon, striped bass, sculpin, dogfish, skates and some others live in these muddy waters too.  There really is a diverse range of life at the Hopewell Rocks."

While sea anemones can grow quite large in some environments, that isn’t the case here.  “They are really hard to find; kind of like looking for coins scattered over a large muddy beach, other times they hang upside down from rocks” Kevin warns.  "But you should go out with someone who knows what to look for and get down to the water's edge to experience the full range of the tide and hopefully see some special wildlife.  Be careful where you step, though!"

Since there are only two spring tides a month, one on the full moon and one on the new moon, that limits the number of opportunities to see the lowest part of the beach uncovered.  Kevin explains, "During each moon, you have several days that might have a low enough tide to expose the sea anemone garden.  With the short window during the slack low tide, there likely isn't more than six total hours a month of exposure.”  That means when you see the full moon or a new moon near the horizon during summer, the sea anemones could be out of the water.

Despite a large number of people that have been visiting the Hopewell Rocks for centuries, it is not surprising the sea anemones were unknown until Kevin's discovery.  Oral history tells us that Mi'kmaq people visited the Hopewell Rocks each fall during harvest for feasting, dancing, singing and spiritual ceremonies.  Perhaps they had a greater awareness of the life at the intertidal extremes.  They certainly would’ve visited a different Hopewell Rocks many hundreds and even thousands of years ago.  The formations, like the recently crumbled “Elephant Rock” wouldn’t have been formed that long ago.  If it had, it certainly wouldn’t have been referred to as the largest African mammal.  If we could know about the Mi’kmaq view of the long lost rock formations back then, we would likely learn as much about them as today’s names say about our culture in the 21st century; E.T. Rock certainly comes to mind in the age of space travel.

In our area of the world, along the Bay of Fundy, we have many opportunities to experience unique places like the Hopewell Rocks.  The Amazing Places Challenge is encouraging people to get out and visit all 50 Amazing Places in the Fundy Biosphere Reserve to celebrate Canada’s 150th birthday.  What better way to celebrate than to spend time on the land visiting the very “Canadian” Amazing Places.

This article is the first of seven in the Amazing Places Challenge series.