Surviving the Fundy Footpath is a six-part web documentary series that follows Bruce Persaud, a city slicker from Toronto, with zero camping experience, as he attempts to complete one of Canada's toughest multi-day hikes. This hilarious series will have audiences cheering for the underdog and flirting with the idea of hiking the trail themselves.

The Fundy Footpath traverses 60 km of the Fundy Escarpment between St. Martins and Alma, New Brunswick. Descending in and out of 19 steep ravines, it totals more than 3,000 m in elevation. Completing the footpath is like climbing to the peak of Mt. Washington, twice, back to back.

On the Fundy Footpath, when you’re not scaling the mossy ravines of the fog forest, staring off from a towering cliff top, or sleeping on a barrier beach, you’re exploring the sculpted sea floor of the mega-tidal Bay of Fundy during low tide.

Physically demanding and surprisingly tough, many hikers are caught off-guard during their first Fundy Footpath expedition. The Fundy Biosphere Reserve, in partnership with the Fundy Hiking Trail Association and VideoBand Productions is thus proud to present an entertaining web doc series that will help would-be Fundy Footpath hikers mentally prepare for their expedition.

It might sound like a cruel trick to play on someone for their first hike, to take them out on the Fundy Footpath, but thankfully, Bruce was surrounded by a perfect team to teach him everything he needed to know to survive, including Alonzo Leger who built the Fundy Footpath, his son Marc Leger who is the current Fundy Footpath Trail Master, Ben Phillips, the Fundy Biosphere Reserve's Conservation Scientist and filmmaker Craig Norris of VideoBand Productions.

Test screenings will be held at five locations within the Fundy Biosphere Reserve to give locals a chance to share their thoughts on the video series before it is edited into one feature length adventure documentary and submitted to the Banff Film Festival. If selected, the film will be screened during the 41st Banff Mountain Film Festival and could be selected for the World Tour presented by World Expeditions.

The videos will eventually be released via the web after touring the film festival circuit. 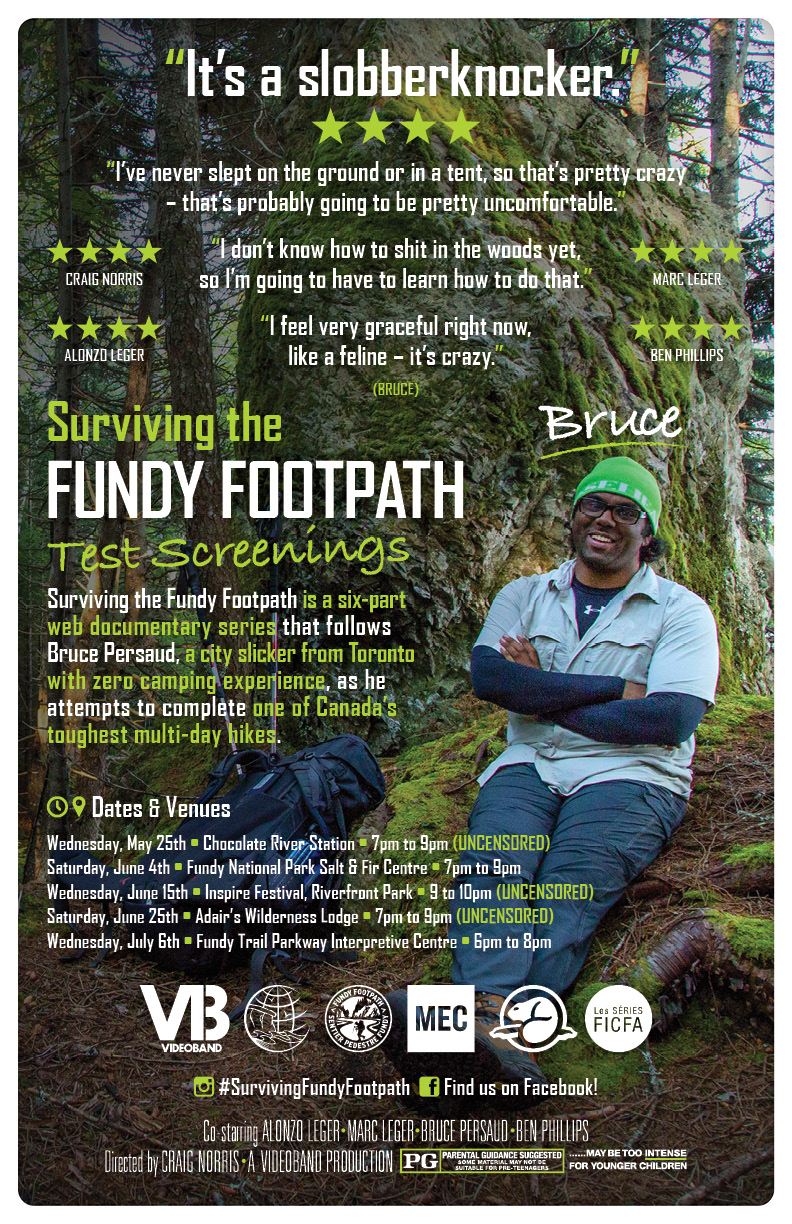 View the Surviving the Fundy Footpath video series at one of our upcoming free test screening events. Please reserve your seat via Eventbrite by clicking on the links below.

The Surviving the Fundy Footpath project has been made possible thanks to funding from Mountain Equipment Co-op, Parks Canada, the New Brunswick Department of Tourism, Heritage and Culture and the Festival international du cinéma francophone en Acadie.

A big thank you to our community screening partners!